This Indian company is embellishing garments for Gucci and Margiela

Discreetly but proudly, Mumbai wears the halo of haute couture 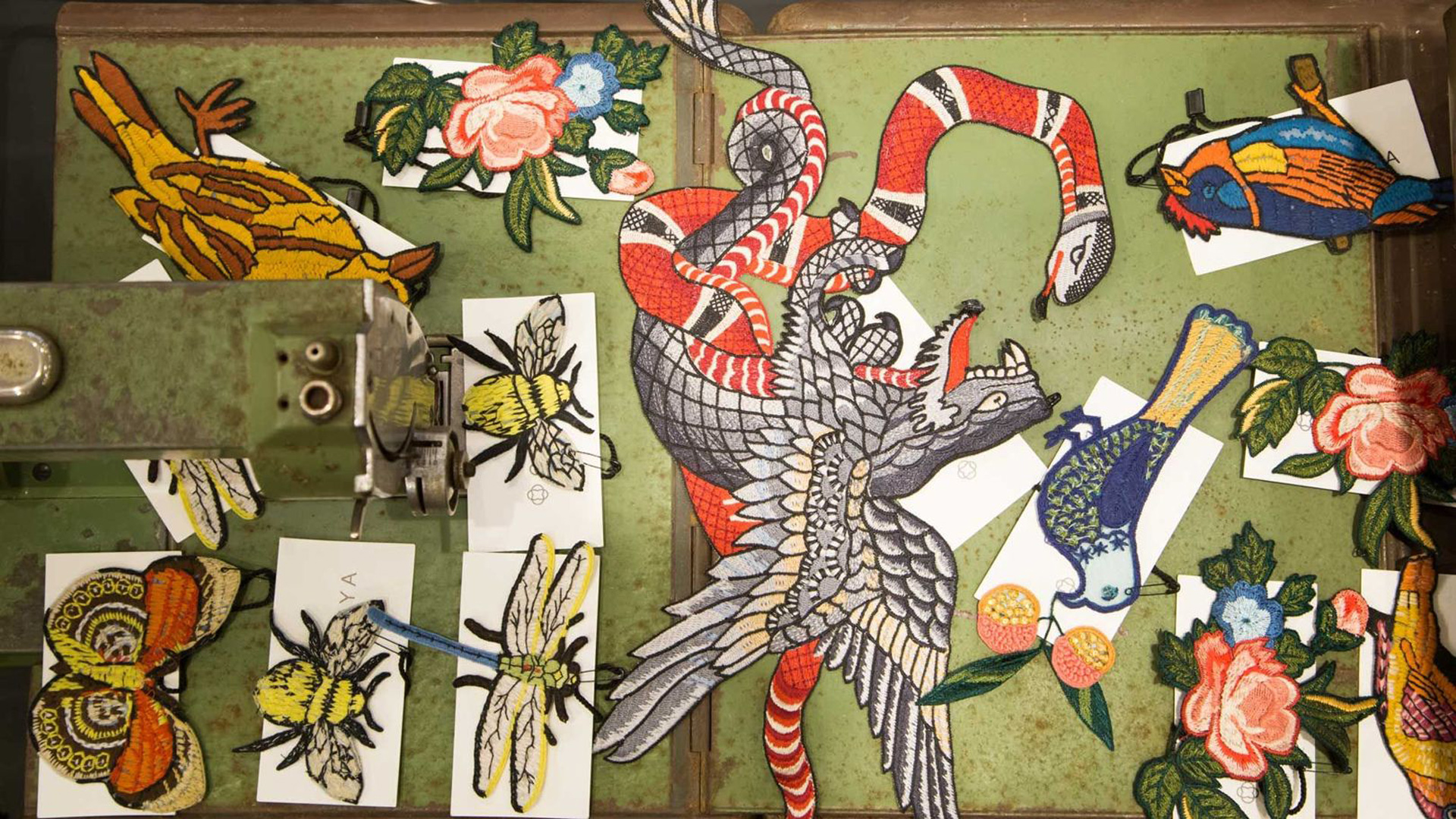 A tide of workers heading home in this crowded Indian city, cars honking, trucks painted as vividly as the colours of the saris, cows wandering past makeshift stalls, and then – POW! – a serpent wrapped round a tiger fighting for its life. A tiger? In Mumbai?

A tide of workers heading home in this crowded Indian city, cars honking, trucks painted as vividly as the colours of the saris, cows wandering past makeshift stalls, and then – POW! – a serpent wrapped round a tiger fighting for its life.


A tiger? In Mumbai?

I am facing a wall of birds, butterflies, flowers, and jungle creatures from which I immediately recognise the tiger embroidered on the back of my own Gucci coat. 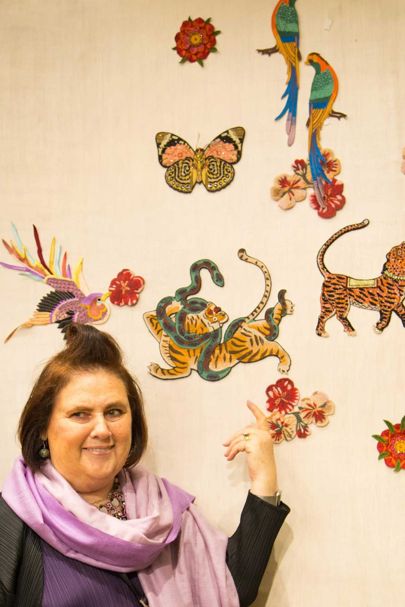 “My father, Vinod Maganlal Shah, started the business in 1984 to bring the finest craftsmanship to the world – and we have been working with fashion houses in Italy for a long time,” says Managing Director Karishma Swali who, with her sister-in-law Monica Shah and Karishma’s brother Nehal Vinod Shah, is now running the teams of hand-embroiderers for the family company, Chanakya.

“I think what brought all of us here is wanting to keep the arts alive,” says Karishma as she showed me treasured historic pieces with real gold thread from the era of Moguls and Maharajahs; and then displayed Chanakya’s resolutely modern handwork. That included embroidery worked into three-dimensional pieces from re-cycled tins, foam mattresses, and even DVDs cut in to fine strips. The rubber, silicone, and industrial materials re-appear as high fashion in the collections of Maison Margiela or Gucci’s “Go Green” collections (which are part of its parent company Kering’s Science Based Targets Initiative to reduce its greenhouse emissions).

“We have always been passionate about ‘Go Green’, so we used different recycled materials – for example, Coke cans that we flattened and cut up – and Moschino produced a huge collection all with recycled materials,” Monica says. “Margiela does it with passion – they make sure they have it season after season. They hound us!”

Since the two women have their own brand, Jade – using the family’s people skills to create fashionable clothes and serve the vast Indian wedding market – they understand the demands of international high fashion and have built relationships with leading designers – going back more than two decades in the case of Maria Grazia Chiuri, now the Artistic Director of Christian Dior.

On the table I see a book on the first fashion “It” bag – the Fendi “Baguette”, which debuted in 1997, devised by Silvia Fendi and the then-unknown Maria Grazia, who had started her fashion career at Fendi in 1989 in the accessories department.

“I started working with India 28 years ago,” the Dior designer said when I asked her about the Chanakya connection, and she recalled her first meeting with the family and its founder, Nehal Vinod Shah, when she was 25 yeas old.

“They are so special because they are such a good image of India – they love the handwork and they care about recycling. They work hard to study, to understand European culture,” Maria Grazia continued, adding that the family’s Jain religion was another source of interest to her. “I’m sure you have sat in the studios where the men are and they don’t look like they are overworked – they look quite happy.”

I had indeed visited the handwork “factory” where the embroiderers are all male, which is the tradition in India. Although I promised not to reveal anything about the new collections, I watched the embroiderers, who sit at floor benches, working on pieces for Gucci’s Alessandro Michele and other mostly Italian designers such as Alberta Ferretti.

One team of workers, who all wear a uniform of white shirts, had their fingers on tiny, translucent beads that were laid out in patterns with thread across black chiffon.

“The embroiderers work entirely by hand with the most sophisticated techniques, and over the years I have learnt to trust them implicitly,” said Ferretti, who explained that Chanakya was the principal embroidery supplier to her parent company Aeffe for more than 20 years.

“They understand my requests, which are always very specific and precise, and more often than not they come back with embroideries that exceed my original expectations,” the designer explained. “Chanakya has such a natural sense of colour and a talent for use of materials, which shines through their exquisite creations. I feel it must be an innate part of their rich culture.”

The family-owned Indian company has built more than a relationship with Italian designers. It has an office and showroom in Bologna, which includes some displays of heritage garments to give a visual understanding of the subcontinent’s rich and rare history in lavishly embellished clothing. There is also a display area in New York, where Ralph Lauren and Tory Burch have shown interest.

But what about the future? Europe once had an exceptional embroidery tradition, as evidenced by Opus Anglicanum – the extraordinary mediaeval embroidery exhibition held recently at the Victoria & Albert Museum in London, as well as many other historical embroidery displays across the world.

The Chanakya family is thinking about how to support embroidery in India, and will found a school either in Bengal – where most of their embroiderers come from – or in the village of Kutch in their ancestral home of Gujarat, in western India, where craftsmen have not received much exposure to international design.

“So far, embroiderers are all men,” Karishma says, “but women are now ready to start, not only from their homes, but also officially. I am excited to do something where kids can get an education, but we also get embroidery. Sadly, we have a lot of grandfathers and fathers, but their sons are moving on to computers and technology. The artisanry is getting lost. So we are determined to do something by 2018.”

“You will not believe how fashion-forward the village women are – their patterns, colours, and designs you could use today,” Karishma reveals. “And they won’t think twice before telling you if things work – saying a colour is not a good idea and sticking to aubergine and orange! If you gain their respect and they see you are there for them, they are incredibly open and happy to learn new techniques.”

And just in case Chanakya is short of new recruits, Karishma’s 10-year-old daughter is already on-message. She comes each Saturday and helps teach the children of the embroiderers to make their own handwork – the ultimate example of Indian family companies keeping the flag flying.

This article originally appeared on Vogue.co.uk 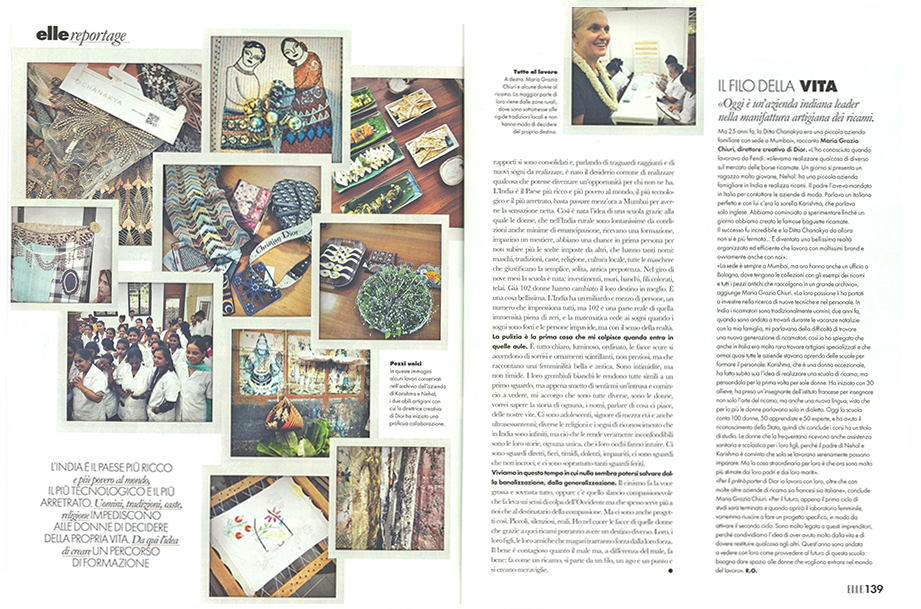 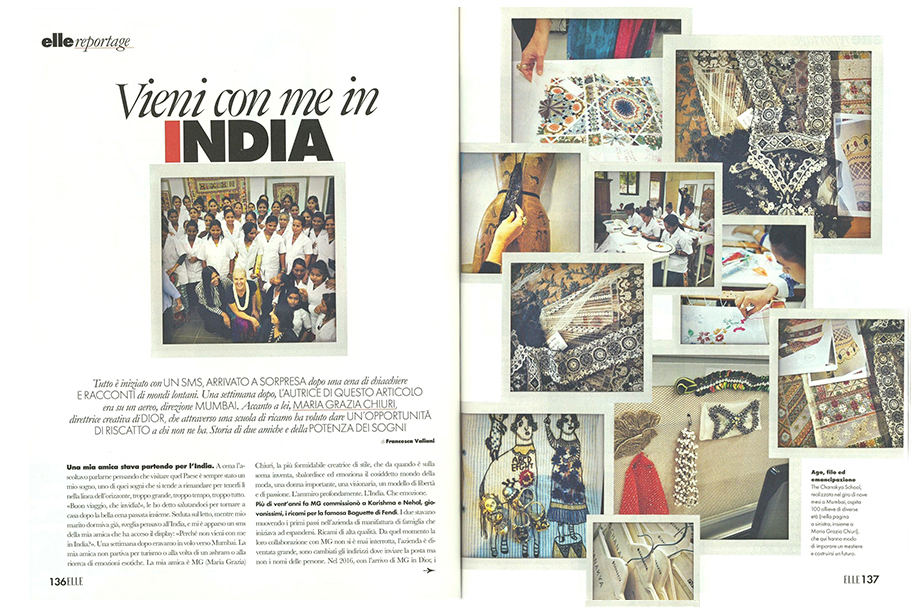